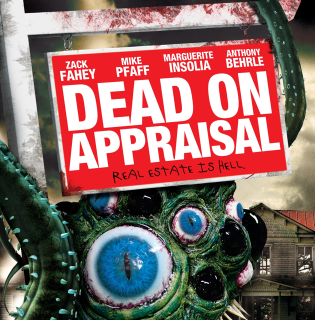 This anthology concerns a house that just sits on the market because of some rather mysterious occurrences that left a lot of residents dead and the cast a shadow over the house ever after. Real estate agent John Dante (Mike Pffaf) has been stuck with the property and despairs over his inability to sell it. Of course the vignettes all take place within the framework story as John relates all the horrible events that have taken place in the house and his ongoing ordeal to sell it once and for all. The house’s woes range from killer bugs to vets suffering PTSD and even includes an up and coming rocker who’s pickled himself. The house survives bombings, flamethrowers, an assault by armed robbers, a boozer party, and a goblin attack. Eventually the true source of the house’s trouble comes to light during an open house John is hosting with his girlfriend. Five years later and the real estate market is still a killer.

The cast pull double and triple duty through out the vignettes titled “The Morning After,” “Father Land,” “Freddie and the Goblins.” and “Closing Costs.” The acting isn’t horrible for an indie production at all with most giving a workable performance and no one really standing out as really good or truly terrible. The effects are a mixed bag of practical effects and makeup, stop animation and CGI. The effects can be shaky at moments and aren’t fantastic by any means but they throw buckets of the red stuff to try and help it work. The picture really struggles when it is subjected to a digital filter and looks like it is ready for Instagram. The puppets in “Freddie and the Goblins” really made my day though. Those things were awesome and reminded me of the creatures in Rock n’ Roll Nightmare.

While the movie isn’t going to wow with effects or story–the story is there it’s just not too exciting–it was an okay flick overall. The reappearance of players, the whackiness of the plot, the anthology structure itself and the heart everyone shows help make this a bearable film to watch. It is easy to see that the young filmmakers were eager and excited to produce this comedy horror collection. If you happen to come across this title and have nothing going on check it out. It’s an okay flick. Dead on Appraisal is released by Brain Damage Films and the special features include two trailers and two behind the scene featurettes. It’s available direct or through other retailers on DVD or VOD. The trailer is below. 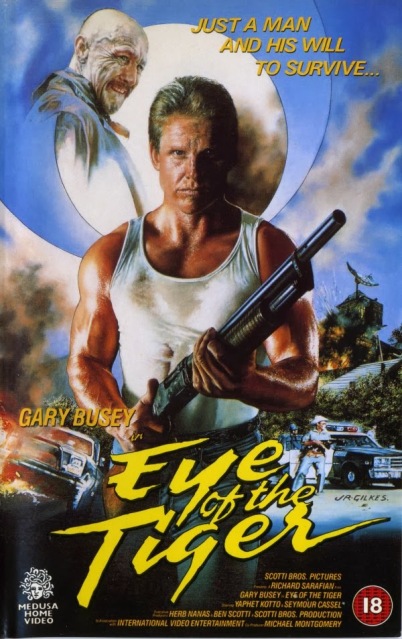 Vietnam vet and all around wholesome midwestern guy Buck Matthews (Gary Busey) is released from prison after being wrongfully convicted of murder. He hitches a ride back to his whitebread home town with his former cell mate Jaime, who happens to run a drug gang in Miami.  Jaime owes Buck a favor and promises Buck that whatever he needs is a phone call away.  Buck receives a cold welcome from the Sheriff (Seymour Cassell) and his friend J.B. (Yaphet Kotto) wonders why Buck won’t just move elsewhere.  Well it’s because Buck is a family man and loves the town he grew up in, that’s why! 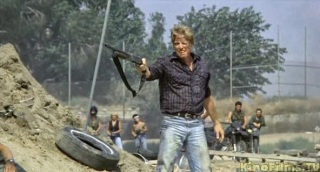 Our overgrown Boy Scout stumbles upon a biker gang getting ready to rape the hell out of Nurse Dawn (Kimberlin Brown).  Like any Eagle he intervenes and chases the pissed off gang away.  Of course the gang cannot let something like that go…especially since their leader Blade is portrayed by none other than badass William Smith!  So they mete out some greasy biker justice when they raid Buck’s house, destroying it, traumatizing his daughter and killing his wife.  Buck fucks some of them up all the while Seymour Cassell is trying to lock him up again so Blade digs up the dead chick and dumps her casket on the lawn of Buck’s ruined home.  If you don’t think the story for EYE OF THE TIGER is ridiculous yet don’t worry.  It’s about to get cranked up to eleven. 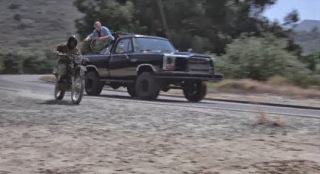 Buck calls in that favor and the next day a couple of Cubans are on his stoop dropping off the most badass armoured 4×4 pick-up truck/death machine this side of TANGO & CASH.  Clear coat and chrome do little to hide the fierceness of Buck’s new beast.  Just when the mournful widower is about to put the make on Nurse Dawn the baddies bust up the hospital and kidnap his daughter.  If Buck was pissed before look out now.  Sheriff Seymour is up to his ears with these bikers and he allows them free reign so there’s little help there.  J.B. is reluctant as hell but grudgingly goes along with Buck.  Ol’ B busts into the town bingo game and tries to recruit help but “Who’s comin’ with me?” doesn’t cut it.  So Buck and J.B. go it alone.

Buck roars into Blade’s quonset hut compound while J.B. drops dynamite and grenades as he soars above in his red bi-plane.  If you figured Buck and J.B. rain shit, fire, hell and metal on the place and make it look like Khe Sanh then you might be right.  Buck picks up his kidnapped daughter and the grounded J.B. and heads back to town for some unfinished business.  He slaps the shit out of the sheriff and hauls him in the truck while the rest of the deputies just watch.  They know Buck got screwed and was getting right.  He rolls back to the compound letting the truck take heavy fire and he bails out in time for Seymour to get blown the hell up and then he throws down with Blade and kicks the bikers the fuck out of Mayberry.  Spoiler alert.

If you can’t tell, I enjoyed the hell out of this fun mid 80s vetsploiter.  Busey was a hell of an actor before his head got banged up and the action is pretty much nonstop.  If you’re a fan of the song Eye of the Tiger you hear it more here than any ROCKY flick.  The Busey is a fuckin’ tiger tearing the shit out of smack dealing bikers in this one.  Check this the fuck out.  It’s definitely one of the best in the Shout! Factory 4 Action Packed Movie Marathon set.  Also in the set is CYCLONE, ALIENATOR, and EXTERMINATOR 2.