“She stripped for a living, now she must strip to live.”  The tagline alone lets you know you’re in for a potentially shitty late night cable treat.  STRIP FOR ACTION delivers that and more.  Featuring regular top poppers Maria Ford and Nikki Fritz STRIP FOR ACTION aka HOT TICKET follows the ladies through an ordeal after two hard edged thieves and their inside man massacre the patrons and talent of Club Capone.

Milquetoast Frank (Kevin Walker) has had enough.  His bombshell stripper girlfriend, Kim (Maria Ford) has dumped him for the club’s manager,Vic (Kevin Contreras) and he owes a lot of money to some unsavory individuals.  He gets in touch with his cousin Halleck (Emile Levisetti) who takes the lead in ripping off Club Capone and its owner Stu (Bob McFarland), who is also headlining stripper Kim’s uncle…creepy shit there…anyhow.  Once the smoke clears Kim and Vic are taken hostage along with stripper Crystal (Nikki Fritz) as Halleck and the thieves try to enact their getaway plan.

Successfully evading detection after their

heist-this is the most isolated strip club in the country-the group take off for their Nevada hide out.  Events lead to the Cessna crashing and the hostages find themselves scheming and stripping for their life.  Keep your eyes peeled for a familiar face hiking in the wilds here.  Kevin Williamson shows up trying to find someone to buy a script he’s written…I suppose Lev Spiro wasn’t as interested in SCREAM as he was in getting Maria and Nikki out of their tops.  Double cross upon triple cross upon double cross finds our heroes and their villains fighting for life against each other and against nature. 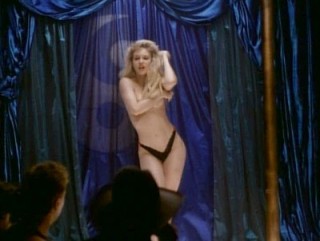 STRIP FOR ACTION is nothing fantastic.  Maria and Nikki show their talents but not too much.  Maria strips in the beginning and then heads upstairs from the club with Vic for a hump.  Nikki bounces her Bettys around some in the club and then a bit more in the wilderness but all in all STRIP FOR ACTION is pretty tame on the skin front.  Levisetti is godawful and delivers his lines with a smile and no affect whatsoever.  His acting is so terrible that no one else’s horrible acting even stands out.

Their are continuity errors a plenty as Maria is bound and unbound while flouncing her mounds through the mountains.  Their is also a point where a wide shot is required on the rapids and the footage used shows a different raft than the one the gang is riding.  The editing is slipshod at best.  The soundtrack budget must have been nil because there is an awkward moment where Halleck sings acapella while Nikki strips by the campfire.

Most folks should avoid this flick.  It’s worthwhile for Maria Ford or Nikki Fritz fans (and even then its kind of weak) but beyond that you have been warned.

Coming soon from Vinegar Syndrome on Blu-Ray/DVD Combo Pack is PUNK VACATION.  Punks  leave the big city behind and wreak havoc on rural locals. Check out the trailer below.