Irma’s husband Rudy is a ragaholic and enjoys beating the hell out of his pregnant wife during sex. Rudy is afraid he will hurt the baby but Irma knew what she was getting into when she married the brute. When Irma is kidnapped by the disgusting Cobra and his gang of drug dealers, arms dealers, thieves and murderers she is gang raped and released. She finds no comfort in her scumbag husband who throws her out of a taxi when she tells him of her ordeal. He don’t deal with damaged goods. He still goes after the gang because his honor is ultimately more important than his wife. After attacking them at their hide out and getting his ass beat he changes tactics. Rudy then stalks and rapes Cobra’s main drug dealer’s , Ronnie’s, sister in revenge to help gain back some of his honor even though the brother didn’t actually take part in the rape. Somehow Ronnie misconstrues Rudy’s attack and subsequent assault as being set up by Cobra  and oddly enough Cobra is out to get him. After leaving her bleeding and crying in the jungle the gang then has to make even. Of course this leads to a graphic miscarriage that leaves Irma enraged, hungry for blood and out for revenge.

Talk about sizzle but there sure ain’t no fucking steak. It seems that this gem of Indonesian sleaze has a lot going for it. atrocious dubbing, scummy characters, everyone is covered in the sheen of the sweat of poverty. Their stench practically rolls out of the screen. It’s that musky, heavy, nasty stench of third world desperation. It smells a lot like Cleveland actually…but no. It sucks ass. It’s boring as shit the action isn’t really much in the way of action for fuck’s sake. But…that’s right dear readers, I said but. The last ten minutes are some of the most batshit crazy things ever put to film. The badass vigilante heroine we’ve all been expecting finally fucking appears dressed up like a third world Rambo in drag. But wait there’s more. The only weapon she has is a fucking bazooka…and she rides a motorcycle. She fries bikers and blows baddies into chunks of meat and there is some out of the blue narration explaining how the world ends before the credits roll. That shit is almost worth sitting through the other 77 frigging minutes of misogyny but it doesn’t If you get the chance pass on this one.

One thing that this flick may do though is give an honest portrayal (Though I hope not…I’m not entirely sure of the state of women’s rights in Indonesia in the late 1980’s so I’ll pass on further comment of the validity of such.) of the difficulties of being a woman in a third world nation where they are second class citizens if they are lucky. I mean, her husband didn’t want anything to do with her while she was pregnant with his baby…because she got gang raped…it’s jaw dropping. Never mind the fact that he got off beating the fuck out of her and she seemed to enjoy it a bit though it frightened her. The real coup is that after her miscarriage (due to the fact her husband shoved her ass out of a moving car) the dude is totally fucking fine with her again. You lost my tainted baby. It’s cool now. What the fuck…

I’ve heard about LADY TERMINATOR for awhile now so it was with giddy excitement that I sat down to behold the ensuing spectacle.  Little known though regarded as the 6th member of the Jackson 5, Jalil Jackson made his directorial debut in Indonesian exploitation cinema.  Not really.  It’s actually veteran Indonesian schlockmeister H. Tjut Djalil who brought us the madcap gems MYSTICS IN BALI and DANGEROUS SEDUCTRESS.    LADY TERMINATOR is a blend of Eastern myth and legend plus good old fashioned plagiarism.  Once again Djalil attempts to make a film that will appeal to Western audiences and this time he decides to take no chances and reshoots a film that made it big five in the USA five years prior. 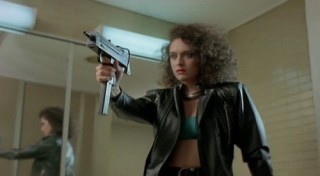 The Queen of the South Sea is insatiable.  She collects men and sexes them up until the eel that lives in her vagina comes out and bites their dicks off.  I’ll give you a second after that… Ready? Ok good.  After having her way with many others, along comes (no pun intended) the man that can give her pleasure a plenty.  He’s so good he can reach in and grab the eel and turns it into a dagger.  Enraged the Queen flies out to the sea to wait on the ocean floor to avenge herself on his descendent a hundred years in the future.  In 1989 a young and attractive anthropologist, Tania (Barbara Anne Constable),  is seeking out the truth behind the legend of the South Sea Queen.  This leads her to a dive to the Queen’s resting place and she is bound to a bed and a mystical eel crawls into her…and she is taken over by the Queen.  From this point on the movie is a pastiche of Arnold flicks.  That’s right-this doesn’t just rip off THE TERMINATOR.  Keen eyed viewers will see some COMMANDO scenes ripped off too.

in the “spesial securita” force.  He finds himself drawn into Lady Terminator’s path as he investigates the murders of her first victims after her re-incarnation.  He is later caught up in her massacre of a night club as she pursues the descendent of the man who stole her vagina eel- rising pop star Erica (Claudia Angelique Rademaker).  Things may start to seem a bit more familiar, though slightly askew, from this point on.  After mowing down a ton of revelers Max and Erica take to the streets and have to escape the Lady Terminator and hide out in the woods where they consummate their love…culminating in a brutal assault on police headquarters.  The Lady Terminator mows down police with cold efficiency and what seems to be a magical M-16 with nigh limitless ammunition.  This scene is somehow more satisfying than the original it ripped off too.  Not sure why.  Might be the hardbodied rocking Lady Terminator or the fact that Djalil seems to use twice the number of squibs THE WILD BUNCH did.

Fresh out of Indonesian police, Max’s friends come in to provide their special skills-they stand there shooting as the Queen piles up their corpses too.  The only unique one is the ugliest man alive wearing a blonde mullet wig and a bandolier across his chest while his dubbed dialogue sounds like Keanu in BILL AND TED.  That’s right it’s Indonesian Rambo.  During this final “epic” battle the Lady Terminator is burned to a pulp and continues her attack looking like a barbecued Rick James.  The effect of her charred and chasing Erica is truly horrifying.  Once the credits roll the shock at what has been seen creeps in and is hard to shake.  LADY TERMINATOR is really a pretty damn good flick.  Some scenes are even more brutal and jaw-dropping than the flick from which it was lifted! 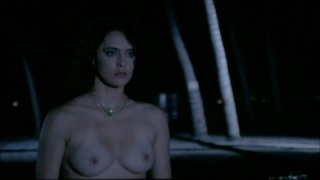 Barbara Anne Constable does not have to worry about too much dialogue.  All she really has to do is kick ass and look hot while doing so.  She shows off her perfect rack as she sits topless while trying to repair her eye…seems familiar… well minus the boobs anyway.  The other American actors are just there to give it a Western feel so it could play better if it was distributed in America (it did get a VHS release in 1989). Something this flick tackles is a beef I had with THE TERMINATOR.  Why doesn’t he have some kind of built in weapons systems or some shit?  Especially in T2 the whole has to be organic to come back through is full of shit because Robert Patrick is fucking liquid metal.  This bad bitch has mother fucking eye lasers after she get hideously disfigured.  EYE LASERS!