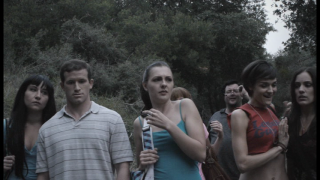 A group of shallow, unlikable 20 somethings get together to rekindle their college friendships at an abandoned cabin in the woods. The cabin left empty for twenty years because of the serial murders that took place around Cutter’s Creek (Hence the original title Axeman at Cutter’s Creek, which actually is an evocative title and ripe for building a legend around.) Sound familiar? If not you probably should go back to watching your Twilight movies because it’s the same fucking plot for about two hundred other movies made since 1980. Probably two hundred of which are better than your favorite flick. Sorry…Twilight rage off…trying to control zombie film rage…never mind this is a slasher.

Hobbled by the fact that director/actor Joston Theney (who happens to play the token black guy Darren) tries really hard to pay homage to the slasher flicks of the heyday Axeman relies on the similar tropes with a few modern twists. Twist one there is a lesbian couple. Sadly one of which has a rockin’ body but is hit in the face ugly. Twist two…uhm…never mind there is only one twist and it’s a small one. Well, I guess there are two. In a daring casting move Axeman must have sent out a cattle call for actual cattle. As a matter of fact, rarely has P.D. seen so many homely and unlikable characters gathered in one flick. Instead of being worried about them I was hoping The Axeman would show up and finish them off…preferably with an axe but for some reason he rarely fucking uses one! He should be The Sharp Pointy Thing Guy, or The Camera Stomping Guy instead of The Axeman. Most of the time he’s attacking the camera and CGI blood flies everywhere.

The Axeman (former NBA pro Scot Pollard who’s almost seven feet tall) is pretty much ineffective as he smiles when he kills and generally begins the kill off screen and is standing posed as the camera pans to him…happened at least three times and gives him a very static and unmoving feel. He wears a rain coat and ball cap that says “Titties” I shit you not. He is the gooniest and most boring serial killer imaginable, the dude even shows his fucking I.D. to the Sheriff (Brinke Stevens in a blink if you miss her role) after he tells her his name is Bill (?!) and there is no explanation or motivation for why he does it. This ain’t Michael Myers, it’s some goober who doesn’t even use the weapon he’s named after for fuck’s sake.

The dialog comes across a decade too young for the characters speaking it making the principals that much more unbearable. Some choice lines, “You want to put your Twinkie in my Suzi Q.” and “My name is Paul and that’s between y’all.” Who the fuck says shit like that? I’ve heard and read good things about Axeman but I think it’s about a different film called Axeman. Though the direction is decent (I will definitely check out Joston Theney’s next effort) the story is boring, the characters are one dimensional, the eye candy is ugly and the killer is laughable. Seriously this is one major ensemble of ugly. 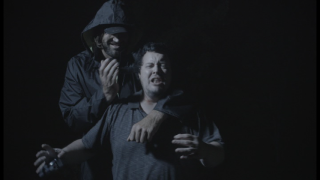 To call the pacing uneven would be kind, this flick is all over the place. Tiffany Shepis buys it within the first five minutes along with some other kills then it slows to a crawl after stampeding out of the starting gate. Oh…spoiler alert. It takes an hour for any boobs to show up and when they do it’s in a “We need to talk…” scene as Tammy and Liz try to build up some slightly more than superficial back story but it’s definitely too little too late. This is pretty amazing considering all the characters seem to do is prattle on and on yet there is no depth to any of them. It’s also been a good chunk of time since the second person in the group bought it so it was like watching paint dry. Gimmick casting fouls up the works as Brinke Stevens is wasted in a small role and Tiffany Shepis shows up to sneer some as one of the comically disfigured or face tattooed bad guys in the opening scene. She happens to be the one with the tattoo.

The CG blood is ridiculous which is a shame because the practical effects, when used, are quite good. When in doubt sling some grue. Seems to have worked for a lot of folks. Not only is there too much CG the setting…the cabin or bungalow or whatever it is in the woods…gets real frigging boring real quick. Midnight Releasing’s DVD of Axeman includes trailers, extended scenes and bloopers. This one falls somewhere between not horrible and okay. If you like slashers check it out. If that sub genre does not appeal to you avoid it.