Ms. Comptom (Mary Carey) is the station head at a struggling network. One of it’s centerpiece shows, Hoax Hunters, ratings have dropped through the basement and she is forced to cut the show’s budget even further. The host Brad, who happens to be the station owners uncle, slouches home and his blond bombshell wife comes up with just the thing. New costumes and gravity defying bazookas will help lift the show’s ratings among other things. After another botched broadcast Brad has one last chance and to remove the opportunity for his boss to sabotage the show again he takes the show on the road and goes squatch hunting.

When his footage is erased he has to improvise and perform it live. Little does he know that as he is frantically trying to save his job that his quick thinking and Stacy’s (Jazy Berlin) golden orbs would lead to the top of the station ladder. The success of the one program lands him the gig of program director and he turns it into the All Babe Network as Compton had feared. In fact it could almost be called the All Blonde Network as Jazy Berlin, Mary Carey and Beverly Lynne are the three whose bountiful bosoms do most of the heavy lifting, or petting, whatever…One of Brad’s strokes of genius is to spice up a car wax infomercial by waxing naked girls instead of cars. While Brad’s star is on the rise Compton does everything in her power (which appears to be fucking men and getting what she wants) to stop him but to no avail. 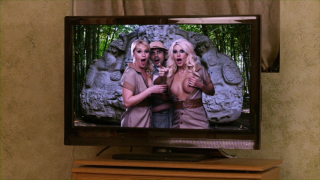 All Babe Network is a real hoot. It reminds me of another late nite flick I dig, Broadcast Bombshells, but with a more benign menace. Someone’s job is much more inconsequential than a bombing! The story is brain dead but fun and the ladies are all excited to doff their tops and get down to business. The scene order breaks down as follows: Intern Joey (Eric Masterson) nails Ms. Compton, Brad bangs out his girl Stacy, Stacy cleans up in the shower, Joey and Brenda hook up in the truck and woods, Mindy (Christine Nguyen) gets it on as the flick goes meta and the characters on screen comment on her bang, Compton and station owner Mark (Voodoo), Mark and Mindy.

The gals are looking good in this Retromedia boobanza and all bounce around and seem to have a good time doing it. Mary Carey is still a good looking woman and probably would have made a fine governor, I’d have voted for her twice if I could and Christine Nguyen may be the hottest late nite star working. She’s stacked, taut, and toned and is hella fun to watch. I think she may be the new queen of softcore the only one who comes close is Erika Jordan who’s body is phenomenal. All of the technical aspects, sound, photography, acting etc… are standard for this sort of fare and if you are watching All Babe Network then you know what you are in for. Check it out if you like soft bangs and sleaze.