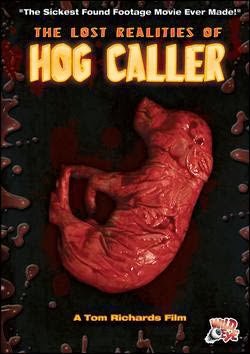 Hog Caller is a real band in this mockumentary style oddity. It follows the Middletown, Pennsylvania grindcore rockers and shows they have always been mysterious and enigmatic. Drugs, booze, women…The Dirtfarmer (Writer/Director Tom Richards) and Vomitrocious (Steve O’Donnell) were living the hellbilly dream. Skeevy reporter Skip Jenkins is trying to shoot a community news expose on the secretive duo. All he can seem to turn up are rumors and innuendo since the bands disappearance. He investigates the bar which frequently hosted the band and interviews fans and haters alike. 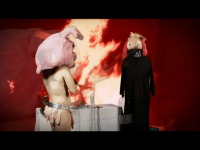 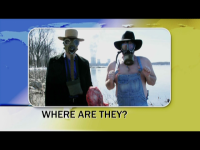 What are the lost realities? Is it a fever dream? Found footage? Mix tape? It is hard to describe as the film is packed with filters, noise, original music, and concert footage. Also there are trippy and nightmarish sequences all or which are tied together with the reporter’s attempt to uncover the band’s fate. Jenkins discovers a box of VHS that belonged to Hog Caller and the tapes contain footage of some of the band’s activities. The tapes reveal Dirt Farmer and Vomitrocious’s dabbling in the occult and Satanism; including encounters with deer and pig carcasses. 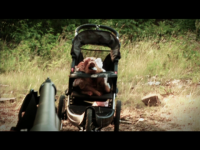 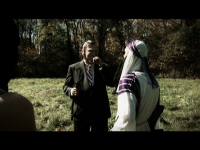 Two lengthier segments of the found footage make up a bulk of the film. One follows the Dirt Farmer as he goes hunting for Osama in the environs of Middletown. Gun in hand he tracks down the terrorist and sees him meet up with George W. Bush. Or at least facsimiles thereof. The two hang out and pretty much party while shooting at targets of Jesus until Dirt Farmer moves in to stop the debauchery. The other sequence shows Vomitrocious babysitting a dead piglet. He pushes it around in a stroller, talks to it, feeds it ice cream–all the normal stuff one does with a baby except with a dead piglet that is drawing flies. Who’s to say what happened to Hog Caller? It may involve Satan, the Pork Princess, the government or a demon pig fetus baby. You know, all the normal stuff that lives in the shadow of a nuclear power plant that had a meltdown. 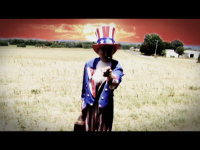 Wild Eye’s release presents the film in all of its schizophrenic glory. The picture quality is as varied as the forms it was shot in from Hi-8 to digital. The sound is good not that anyone can understand too much of the lyrics anyway. Extras include a behind the scenes featurette and the trailer. Not sure about it being the sickest FF film but it is one of the more bizarre. The flick will appeal to those who enjoy off kilter, non sequiter or mix tape style entertainment with a horror bent. Check it out, it’s a good flick for a Saturday afternoon when you’re stuck in your head.