EXHUMED is the story of a group struggling through a loss of cohesion in the family unit.  It isn’t caused by things such as the TV or internet (get off my lawn), but rather an increase in the delusions of the matriarch.  The Governess (Debbie Rochon in a scenery chewing role) is lashing out at those around her as she spins out of control in a world of ever growing delusion.  The only thing she has left is her power which she wields with a whim for her own pleasure.  The Butler (Michael Thurber) is the glue that tries to hold this odd family together.  He is the stalwart and grounded realist that tempers The Governess’s flights of fancy.  He also acts as the cure for her bile when she is taken with violent behavior.  For a while.

The family lives a sheltered and much shuttered existence as the house they inhabit does not allow any sunlight at all in.  The whole bunch do not possess much of a facade of normalcy at all.  The Governess is extravagant, The Butler is staid, Rocki (Evalena Marie) is smoldering, Laura (Sarah Nicklin) is shockingly emotionally stunted, and Lance (Rick Trethaway) is a sot.  The family is eagerly awaiting the release of Lance’s brother but are crestfallen to discover he is not being released on parole.  They quickly begin searching for a replacement.  You may have noticed this isn’t a family in a traditional sense.  It is the shell of a family, a much larger one that spanned the nation with houses everywhere.  This group is the last remnant of a formerly sprawling cult founded by Laura’s father.  Like most cults it has a family fetish but another tenant of the cult is that sunlight is poison and anything it touches is contaminated…odd but it further sets the mood and explains the black and white film.  Flashbacks show a much larger and happier cult.  These are shown in color as if to indicate a better time.  Not entirely sure what a better time in a cult might entail, but it looks like the majority of the members were happy at the moment.  Much more than can be said about the shades living in the house now. 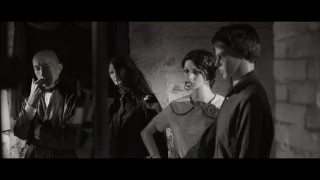 In one of the films most interesting story arcs, The Butler keeps mannequins in the basement that represent each member.  They sit around a table-rather like they are the family ideal.  He draws on the mannequin heads with magic markers and adds various accoutrement and dress indicative of the person it represents.  The family is abuzz at the prospects of a new member and an ad for a room for let is placed on the local college campus.  Much to Laura’s excitement a young student named Chris (Michael Reed) applies for the room.  His arrival and the questions he brings with him set The Governess on a dark path.  Will the family stay together as their world spins out of control in startling mayhem or will The Butler fail to calm the enraged Governess? 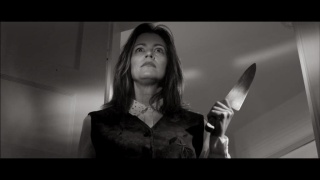 EXHUMED is a remarkably claustrophobic film with one or two interesting set pieces.  The house is oppressive as is the atmosphere established by the photography.  It is shot in black and white using a high contrast scheme of dark and light colors allowing the shadows to almost come alive in a noir like fashion.  The score is ethereal and haunting further enhancing the feeling of dread as the film slowly boils to crescendo.  The acting is adequate and in some places moreso.  Debbie Rochon is fantastic as a GREY GARDENS dowager type and Sarah Nicklin brings youthful innocence and insanity alive in the character Laura.  There are a lot of odd subjects covered.  Various neuroses and psychoses are on full display along with some good old fashioned necrophilia.  There is a remarkable scene where director Richard Griffin skillfully constructs a tableau that leaves the viewer wondering if they are seeing the family members or the mannequins.  Ultimately the film seems to tackle the problem of the human need to be wanted and interact with others while trapped in the very real problem of self isolation.  How do we adapt to this world of digital connectivity and physical isolation?  I can easily see the difficulties that many of us face or will have to face play out on the cast of EXHUMED.  Light on gore and heavy on plot this film is a delirious spiral into the madness of fearful people in search of acceptance.