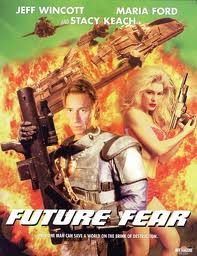 Stacy Keach must have been in the neighborhood when FUTURE FEAR was being shot.  There is no other reason that comes to mind as to why he would be slumming it in this production.  Yet another entry in New Horizon’s Maria Ford Collection and boy howdy this has got to be the worst of the lot… I hope.  Anything worse than this and I might not be able to sit through it.  Behold the action packed futuristic cover!  This is a classic example of shit that never happens in the film, costumes that aren’t in the film, and futuristic vehicles that aren’t in the film.  What’s in the film?  Maria Ford, Stacy Keach, Jeff Wincott and maybe four other people who have less than 20 seconds screen time combined. 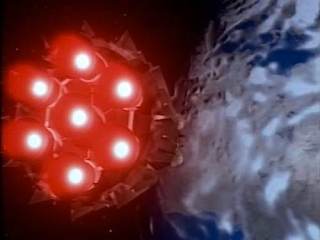 FUTURE FEAR opens with the most long, drawn out and boring helicopter chase ever captured on film.  The film is set in 2017 and Dr. John Denniel (Wincott) is desperately trying to evade his ex-wife Anna Fontaine (Ford) as they play a high stakes game of cat and mouse in helicopters that are color coordinated with their outfits.  He is trying to deliver alien hybrid fetuses to a top secret accelerator held by the opposition.  What?  Oh don’t worry the 398 flashbacks will clue you in.  The military launched an unmanned probe at a comet to collect alien RNA off of it.  A crooked neo-nazi general crashed it into Africa and it wiped out billions of the earth’s population.  John was drafted to be lead biologist in charge of developing a vaccine.  He was assigned Anna as his assistant…they bone… she’s pregnant…some weird abortion debate develops and she hates him.  Simple.  Right?  He has flashbacks to when his dad died from a virus as part of a military experiment and he calls himself the Mad Hatter and there are a bunch of Alice in Wonderland undertones and entire plot segments dedicated to Alice…what the fuck is going on with this flick? 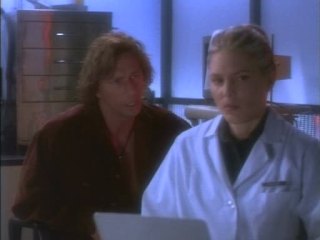 Don’t worry too much about that because he may have developed a cure but everyone dies by the end of it anyway with the potential cure left sitting in an abandoned underground base.  Anna is shot and John has the virus the end.  The movie is not presented in a traditional linear fashion to begin with so the fact that it is rare to have five continuous minutes of the story uninterrupted by flashbacks, or flashforwards, or even fucking parallel plot lines (two characters are rarely on the screen simultaneously in this shit fest).  The set could be one of any from Corman and company’s other productions.  Vents and ducts, tight hallways and small rooms with ancient flashing computers.  You know the ones.  The three leads pretty much spend the time chewing scenery with no one else in frame delivering the most assinine monologues ever given voice.  The CGI is the best 1992 had to offer.  This one is a serious shitter.  It is almost so bad its good but it isn’t.  It just sucks.  Maria shows her talents early on but it isn’t enough to carry this film.  She makes the most ridiculous faces throughout the film.  Vacant distant stares or the sneer that looks like someone farted and she’s just smelling it.  Avoid this one if you can.  Die hard Maria Ford fans may not be able to and I understand.  Just brace yourself for it.

There are no features to speak of just some trailers for SHOWGIRL MURDERS, ALIEN TERMINATOR, and ANGEL OF DESTRUCTION.