There are low budget flicks and there are no budget flicks.  DON’T LET THE RIVERBEAST GET YOU! falls into the latter category.  Charles Roxburgh directs the feature length comedy with some classic monster movie elements that he co-wrote with producer and star Matt Farley.  Rivertown, USA is a quaint any town that is populated by hollow and undeveloped archetypes.  You have the town’s elite…who are the tutors… and Neil Stuart (Farley) was the greatest tutor of them all until he started with all the crazy talk of a riverbeast.  He left Rivertown, USA in exile and returned later in order to represent his family at his god-cousin’s wedding and he has to face all the people he left behind.  This includes his mother, his roommate, his tutoring pals, and the shady journalist who forced him into exile after humiliating him publicly.  Will Rivertown, USA believe Neil, will anybody help him stop the Riverbeast before its too late?

The beast comes back and Neil knows he must save the town with the help of his fellow tutors, his roommate, his popping and locking vagabond friend, Frank Stone (Kevin McGee) the professional athlete, and famed big game hunter Ito Hootkins. There are so many plot threads as to make things distracting.  Here are a few: the relationship between the pervy private school teacher and Allie Stone (Sharon Scalzo), the relationship between Neil and the muckracker Sparky Watts (Kyle Kochan), the relationship between the guitar player and dancing vagabond and so on and so forth.  It is an exercise in empty character studies of empty characters.  If you can get past the pedantic cadence and super dry humor there are a few fun things going on here. 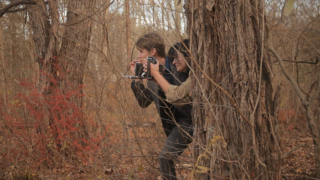 The acting is atrocious and overwrought but everyone seems to be having fun with it.  The story is structurally sound though boring as all get out.  The film succeeds in what it has set out to do…provide a droll comedy with some horror elements and camp, but it falls flat as a horror film.  Since it falls flat as a horror flick it should succeed as a comedy because even bad horror flicks can be funny but bad comedies cannot.  Sadly, it does not succeed as a bad comedy.  It comes across as a pretentious inside joke that is about an hour and a half too long.  Part of this may be due to the fact that it is marketed a bit as a horror flick and there is too much bad humor and not enough horror.

Some of the cool things going on with RIVERBEAST is a William Castle gimmick where the screen flashes red before the beast strikes, the film definitely has high production values, the riverbeast itself is pretty cool and needs to get in some real horror flicks, the band routine is pretty funny but came a bit too late, and the DVD is high quality.  I even was shocked there weren’t fake tramline scratches in the movie.   Considering this is an indie horror-comedy it is fairly loaded with features.  The disc has a commentary, behind the scenes, bloopers, and music video.  Fans of droll humor may appreciate this but horror fans be warned.  He may be the most indecorous beast of them all but the movie is too pretentious and corny (a hard combination on a good day) for this viewer.  There should have been some meat other than ham to go with this cheese.