There’s a new flick on the horizon.  Coming to theaters December 6th is 2 BEDROOM 1 BATH.  A young couple move into an apartment that seems just right as they try to start their family.  Strange happenings and unsettling dreams send the couple’s lives spinning out of control as they explore the history of their new home and find that it is haunted by a former tenant.

2B1B has a cast that reads like a genre who’s who.  Eric Roberts, Dee Wallace and Costas Mandylor provide the supporting roles for stars Michele Hicks and Andrew W. Walker.  It is produced by Al Bravo Studios, Al Bravo helped produce THE WAILER and THE WAILER 2 based on the la llorona legend; and Chemical Mind Studios.  Check out the stills and the official press release below. Keep up to date on the website

There’s nothing more satisfying than finding the perfect home, Rachel and Kevin Foster (played by Michele Hicks and Andrew W. Walker) seem to have found theirs. It’s a fresh start for their sometimes troubled marriage as they try to start a family, but the apartment itself seems to have other plans for them.

Al Bravo Studios and Chemical Mind Studios present 2 Bedroom 1 Bath, the chilling tale of a couple whose “perfect” home turns out to be anything but sweet.  When strange occurrences in the apartment invade Kevin’s dreams and push Rachel over the edge, Kevin is forced to delve into the history of his new home and uncovers a terrifying past.  The tormented spirit of a former tenant haunts the couple and threatens to tear their marriage apart. 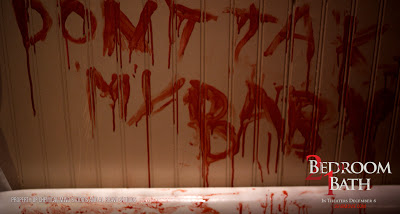 Also starring Eric Roberts (The Expendables, The Dark Knight), Costas Mandylor (Saw series), Dee Wallace (The Howling, E.T.), this ghostly tale shows that there is no turning back once the evil clutches of the supernatural grab hold of you.  A frightening, psychological thriller from a new voice in horror, Writer/Director Stanley Yung, 2 Bedroom 1 Bath turns a young couple’s dream of “happily-ever-after” into a horrifying nightmare.