THE LOVES OF HERCULES [Gli Amori di Ercole]is an Italian sword and sandal epic directed by Carlo Bragaglia (who worked with Edward G. Ulmer on HANNIBAL) and starring Hungarian strongman Miklòs Mickey Hargitay as Hercules and Jayne Mansfield in a dual role playing both Queen Deianira of Ecalia and Hippolyta the Queen of the Amazons.  Shot in Italy and France with a huge cast of extras LOVES OF HERCULES is a nigh perfect example of what makes peplum great.  They don’t make flicks with physical sets and costume designs like this anymore.

Also known as HERCULES VS. THE HYDRA which is kind of amusing as the hydra has about ten minutes (probably less) of screen time.  It doesn’t regrow multiple heads for each one lost and it doesn’t take Herc that long to hack off one head and kill it.  In what might be a technical difficulty, Hargitay has to reach up and pull the head down with his hand after hacking it with his axe for a prolonged period.  The story plays as more an action intrigue rather than have sword will whack that is prevalent in some peplum.  Officers and advisors plot to bring an end to the reign the current ruling family of Ecalia and what better way to do it than to have a pissed off son of Zeus to do it?

attacks Hercules’ town and massacres many of the residents and brutally executes Hercules’ wife.  Afterwards he lays out his plan in typical Bond villain fashion and murders his king.  Now Deianira is queen of Ecalia and she is perceived as weak by Licos and his fellow conspirators.  Hercules will soon come to Ecalia and through a trial by the gods they expect him to kill Queen Deianira leaving a power vacuum they can exploit.  Unfortunately for them Hercules botches the trial and since he finds himself suddenly single he is looking for a woman to fill in the fresh hole in his life the queen looks to be a good fit. 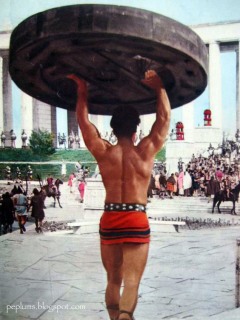 Too bad she is promised to a local princeling.  This really tries to set up a story of intrigue and fails miserably to the point where it becomes a true spectacle of ineptitude to behold. Luckily enough outlandish visuals help keep the viewer riveted. When the prince is found dead with Hercules’ dagger in his back Herc sets out to prove his innocence leading him to his encounter with the hydra.  Don’t blink or you may miss it.

The hydra is a nightmare (not in a scary way) of foam and paper machè that left me laughing.  Mickey wrestles with the barely mobile beast for awhile and then whacks its head off with an axe.  Well he whacks at it and then finally pulls the head off with his bare hands.  He then succumbs to his wounds falling unconscious.  Granted there are many great laughs in this flick, many of which involve Hargitay picking up huge objects and running around with them hoisted over his head before battering something with it or chucking it away.

He encounters the Amazons and becomes enamored of their queen too.  This guy just has no control.  Unfortunately anyone who loves the Amazonian queen gets turned into a tree that wriggles about a bit and cries for help.  Yet another hilariously awful but fun effect.  This flick certainly puts the “special” in special effects.  Like any Hercules peplum he wins the day and everything is hunky dory.  This one is quite campy and quite a hoot.  The locations and sets are awesome while the acting, effects and story are almost sidesplittingly cheesy.  Its a fun ride and you can check it out on Netflix as HERCULES VS. HYDRA.