CLASS OF ’74 is a fun flick that came about in an odd way.  Arthur Marks bought Mack Bing’s 1972 semi-psychedelic flick GABRIELLA, GABRIELLA and shot some new footage with new stars and bringing back Gabriella Caron, aka Barbara Caron in CLASS OF ’74, in actuality its Barbara Mills who may be familiar from the early 1970 exploitation flicks THE SUCKERS and THE LOVE GARDEN or 1969’s THE STEWARDESSES.  Meanwhile, GABRIELLA, GABRIELLA is a coming of age love story shot in an highly experimental fashion embodying and trying to deliver the message of the hippie and peacenik generation. 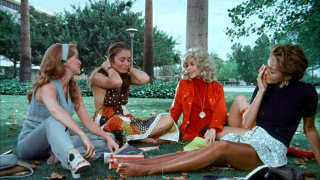 The first feature CLASS OF ’74 introduces three students, Maggie (Sandra Currie), Carla (Marki Bey) and Heather (Pat Woodell) all having a conversation with Gabriella (Mills).  When they get together they decide to take the young and naive Gabriella under their wing and show her how to deal with men without being taken advantage of and how to get her way while having fun.  After their initial pact-Gabriella must do whatever they say and they will show her the ways of the world-the film carries on in a structure of vignettes where Gabriella is taken into the tutelage of each individual girl in turn.  The central piece of each vignette is a lengthy flashback scene that is sourced from Bing’s GABRIELLA, GABRIELLA.

Each of the girls have their own philosophy.  Maggie views sex as a down payment for future favors as a way to get ahead in the world.  She believes if you have a great body to use it.  Carla thinks similarly when she says, “the better the body the better the breaks,” but she also sees it as a way to become the aggressor or dominant member of the relationship.  Heather believes its like a party as long she is the one throwing it.  It starts when she says it starts, goes how she says it goes and it ends when she decides to end it.  Gabriella learns each lesson in turn as she works her way through the men who her three friends introduce her and finds herself in a good “arrangement” where she becomes a kept woman.

Tonally the film is vastly different than GABRIELLA, GABRIELLA and I would recommend watching the co-feature first just to see how remarkable a feat Marks accomplished when he made an original and entertaining film sourcing Bing’s original film.  Bing’s film becomes part of Gabriella’s backstory and is woven in through a series of flashbacks narrated in voiceover by Barbara Mills.  CLASS OF ’74 plays out like a window into the lives of college girls specifically for men so the movie does its best to entertain its target audience.  Mills brings an innocence to the role that is vastly different from her previous work in THE SUCKERS and THE LOVE GARDEN where she is one who is familiar with the ways of men and the world.

first 15 minutes which show some scratches, dirt and artifacting as was stated by Code Red on the film’s information page.  Overall the transfer is quite good with quality picture and sound.

GABRIELLA, GABRIELLA
GABRIELLA, GABRIELLA is the film that Marks built upon to make CLASS OF ’74.  It too stars Barbara Mills though this time she is credited as Gabriella Caron.  It follows the life of the young, carefree and in love Gabriella.  It shows her less than ideal home life, the skeezy infidelities of her father and her mother’s indiscretion as well.  By all accounts Gabriella should be jaded though she is not.  This has caught the attention of filmmakers Carol and Shelley who want to make a document of the pure relationship between Gabriella and her beau Stephan.

Carol and Shelley are also documenting the many different kinds of love and how they are regarded in society.  The interview with Xavier is particularly interesting as it mirrors events still happening today in his struggle to find acceptance and even simple recognition.  There is a lecture held by a Swedish psychologist called EROS the “Eternal Rights Of Sexuality.”  The lecturer reads from cue cards and her stilted accent makes it all the more bizarre.  Throw in the fact that she is going to narrate an encounter between two of the group’s members and it gets even weirder.  The young female is played by Linda York who was also featured in THE LOVE GARDEN.  It is good to see her in another film. She has a cute and innocent look that isn’t too common in exploitation flicks.  The film keeps getting more and more psychedelic until it reaches its climax in a seedy building off of Tranquility Street.  The young couple have to run through throngs of angry people.  There are children with rifles, police officers gunning down peaceniks, racists and bigots of all varieties spitting their venom.  Once they enter the room it is a lush wilderness with works of art and mobiles hanging suspended

The setting thinly veils the allusion to the young couple’s bodies being a wilderness for exploration, beautiful like art for appreciation, and also something to enjoy and play with like a toy.  During this encounter the outside world rails with chaos and violence trying to assail the purity of their love.  The young children are those who were sent to fight and die in a war that continued to grow in unpopularity.  The police brutality is something that was felt but not feared by the surging peace movement.  Likewise, minorities were fighting to assert themselves in a turbulent time.

GABRIELLA, GABRIELLA is a serious movie.  It has a message and it is very stylistic in its presentation.  I enjoyed it as much as-if not a little more-than CLASS OF ’74 which co-opted the film and eliminated the message for entertainment’s sake.  This is a must have for fans of Barbara Mills and fans of 70’s sexploitation.  GABRIELLA, GABRIELLA is a counterculture gem that shouldn’t be missed!