Produced, written and directed by Bert I. Gordon THE POLICE CONNECTION (aka THE MAD BOMBER) follows the story of William Dorn (Chuck Connors) who feels it is his duty to punish the Los Angeles community for the wrongs they commit.  He starts out with those that he perceives as being responsible for the death of his daughter and the break up of his marriage.  He blows the hell out of her old high school and the mental institution where she died.  Hot on his trail are Detective Geronimo Minelli (Vince Edwards) and his partner Inspector Blake (Hank Brandt).  Well maybe not so hot on his trail.  Minelli constantly reminds his team and his captain that the success rate of capturing a bomber is low but that they have a potential witness in the form of a violent rapist.  Finally the rapist, George Fromley (Neville Brand), is captured in an elaborate sting.  After much persuasion on the part of Minelli he agrees to do an Identi-kit to help bring Dorn to justice.  It is now up to Geronimo and L.A.’s finest to beat the streets and capture the mad bomber. 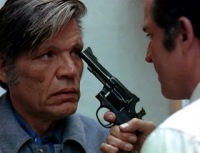 This is a shockingly violent and graphic film.  The bombing victims are torn apart and the damage is pretty massive.  This thing is packed with nudity too.  The rape victims always get their tops torn Naschy-style and sometimes even leaves them running through the woods in all their glory.  Fromley even kills one in a drawn out strangulation scene.  The final showdown has to be seen to be believed.  It is shocking in its suddenness and its gore.  This flick has plenty of the red stuff and plenty of strippers going around too.  Another fun thing to see is the Los Angeles PD’s giant mainframe that is no help whatsoever.  The thing is a hoot.

heartbroken father who spirals out of control in an orgy of madness and violence.  It was quite shocking seeing Connors in this type of role because it seems he is usually on the side of the law.  Though he is on the side of law in a way.  It is hard to watch THE POLICE CONNECTION and believe that Joel Schumacher’s 1993 FALLING DOWN was not inspired by it in some way.  A man just snaps and decides to teach some manners to society’s ne’er do wells.  It just so happens he is bat shit crazy and goes about it in an extremely violent fashion. 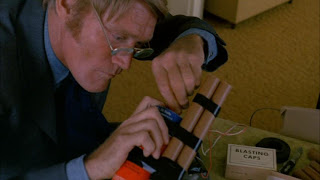 The film is well shot and the locations used are fantastic.  The exterior scenes are great because they show 1970s Los Angeles.  Especially the lead up to the final showdown as Dorn drives through the city.  The picture quality on the DVD is remarkable.  Code Red pulled out all the stops in mastering a crisp, clean, and gorgeous transfer.  It is presented in 1.78:1 anamorphic widescreen and has a running time of 93 minutes.  This is the violent theatrical cut with all the gore and nudity.  No bones about it, this is definitely going to be one of the best releases from Code Red this year.  Make it a point to check this one out.  It is available directly from Code Red’s Big Cartel store.

The Code Red DVD includes a version of the film with a music only soundtrack void of dialogue and sound and a new slate of Code Red trailers.

The trailers are:
FAMILY HONOR (forced)
JUST BEFORE DAWN blu-ray
THE FOLKS AT RED WOLF INN
CLASS OF ’74
SPLITZ
THE GIRLS NEXT DOOR
GOLD OF THE AMAZON WOMEN