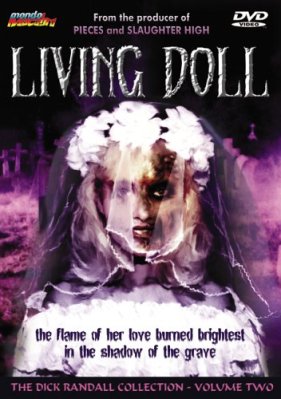 LIVING DOLL is another flick produced by veteran schlockmeister Dick Randall (DON’T OPEN TIL CHRISTMAS, FOR YOUR HEIGHT ONLY, PIECES, THE GIRL IN ROOM 2A…he has some winners under his belt).  Howard (Mark Jax) works in the hospital morgue by day and is a med student at night.  Things don’t seem to be going his way as he mopes through his day to day life.  His boss is an asshole and his co-worker and friend Jess (Gary Martin) seems to keep him around as a sidekick.  The only bright spot of his day is the beautiful young flower shop salesgirl, Christine (Katie Orgill).  He even skips classes and study groups so he can stalk her and photograph her.  This young man is smitten.  Just kidding he’s creepy as fuck.  As sane as someone who struggles through medical school while working in a morgue and stalk a gorgeous bottle-blonde is, one can imagine how much this guy loses his shit when she turns up on the slab and he is supposed to prep the body for autopsy.  He goes even further around the bend when he has to assist the pathologist.

It’s a continuous downward spiral as he steals her corpse from the graveyard and takes her to “live” with him in his rat trap walk-up studio apartment.  His landlady (Eartha Kitt) grows steadily more suspicious that Howard has a girl in his apartment because she hears talking and voices coming from his place.   As Christine’s corpse decays and putrifies further so does Howard’s mind.  Howard interacts with her in his madness and even follows through with her demand to murder her p.o.s. boyfriend Steve.  All the while Howard sees Christine as she appeared in life and does not see her as she is until the absolutely insane conclusion.

The flick is fairly gruesome and gory though not nearly as much so as the NECROMANTIK series.  The autopsy is off camera following the initial graphic incision and any explicit necrophilia is implied or off camera except for some grotesque scenes of kissing.  Watching Howard’s descent from introverted outcast to raving lunatic is truly disturbing. 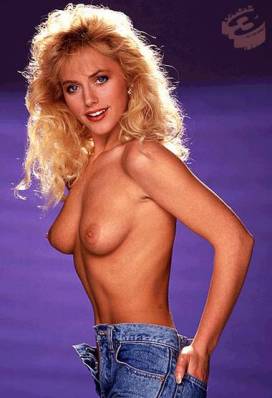 Mark Jax is quite good as Howard and Gary Martin hams it up as Jess.  Freddie Earlie is great as the crotchety, angry malcontent of a hospital morgue supervisor.  South African bombshell Katie Orgill was one of The Sun’s Page Three Girls and her role of Christine serves as her film debut.  Sadly Katie does not go on to do any other films after LIVING DOLL.

The soundtrack is Kenny G atrocious at times and even has a honky tonk theme song sung by Gary Martin and it certainly does not help to improve the viewers listening experience.  Co-directors George Dugdale and Peter Litten acquit themselves very well and unfortunately only directed one other feature together–SLAUGHTER HIGH starring Caroline Munro.  Litten also directed HEAVEN’S A DRAG in 1994.  Howard’s hell is devilishly lit varying shades of blue, red and green which lends even more gravity to the growing madness.  It makes his shithole rat trap apartment look like the nightmare it really has become.

Another solid Mondo Macabro release, genre fans should pick this weird ass flick up.  The ending is

You can also find this review floating around at Jed Bundy’s Wonderful World of Horror. Check it out some great stuff over there.