Fred Olen Ray brings us this fairly staid sci-fi-ish espionage thriller CYCLONE staring the Fall Guy’s Heather Thomas as smoking hot, badass biker babe Teri and Jeffrey Combs as her nerdy not-so-mad scientist boyfriend Rick.  The US military industrial complex has funneled five million bucks into Rick’s backyard garage to get a weapon that will change the world.  Rick has designed the most technologically sophisticated and heavily armed weapons system the world has ever known in the form of a…motorcycle.  I guess this is the 80s so it had to be either a motorcycle or a satellite. 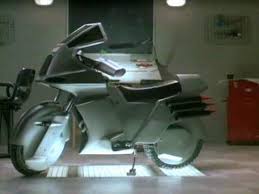 It might be a spoiler to say that Teri ends up fighting off a shadowy cabal out to get this deadly weapon after Rick is killed except for the fact the DVD box says so and after about twenty minutes the viewer is wondering when the hell someone is going to kill Rick.  When it does happen though the payoff is pretty cool.  Rick gets his brains scrambled in spectacular fashion at a punk club when his cabbage patch is fucked up by an aging punk rocker with an ice pick.  With Rick lying dead on the dance floor only Teri stands in between the punk rock baddies and the badass world destroying future bike.

activating recording for Teri which triggered for her after she had gone home after his death.  It turns out that the most important part of the bike is the power pack that pulls energy from the hydrogen in the air and everyone is after this source of limitless power in addition to the bike.  Why not put a limitless source of power in a fighter/bomber or a mega tank?  Meh, I could go off on a tangent about the sheer boneheadedness of making something which channels free and unlimited energy from the air and putting it in a bike but there really isn’t a point is there?  This is a Fred Olen Ray flick so it doesn’t matter how the conceit came about just as long as its fun.   And CYCLONE is definitely a lot of fun. 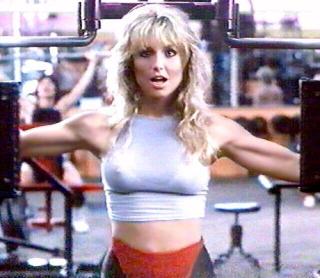 There are plenty of shots of Heather Thomas being a badass, gorgeous if somewhat ditzy blonde.  Since this is a FOR flick there is some gratuitous nudity and leering shots but not as much as you’d expect.  There are shots of 80s babes working out and stretching and doing other things that must be done sweaty and sexy and then there is a shower scene that plays in the background as two principles in the foreground perform one of the less boring exposition dumps that I’ve been subjected to.

CYCLONE is a meatheaded, tense and exciting actioner in the best

of the 80s action tradition.  Fred Olen Ray gets some flack for being formulaic but some forget his bag of tricks.  He makes some good movies and I for one do not mind if he goes back to the well to give us some more. Some folks may notice the band playing in the punk rock club is none other than Haunted Garage! Bad ass!

CYCLONE is available in the ACTION 4 PACK from Shout! Factory along with EYE OF THE TIGER, EXTERMINATOR 2 and ALIENATOR.