LEGEND OF THE HILLBILLY BUTCHER looks like it could have aired on a TV weekend matinee–albeit very heavily edited!  It has the look and feel of a 70s backwoods romp.  It is shot in soft focus, overexposed just a touch, grainy and shows signs of wear.  In many features this proves to be a distraction but it largely enhances the mood and effect of the BUTCHER.  While not shot on location in the south

Carl Henry Jessup is a simple man.  He has simple pleasures.  He enjoys his drink, his friends and his privacy.  His Papa was famous in those parts for his cooking and though his half sister Rae Lynn tries, can’t hold a candle to his cooking.  There were rumors as to what Papa Jessup was selling but they were never put to rest one way or another.

When Carl was just a boy he lost his parents and he misses them badly.  He remembers them as a loving couple who also enjoyed many of the things Carl does like drinking shine and sitting under the shade tree.  He misses them so much so that he tries to make a deal with the devil–referenced here as Sam Bakoo– to bring them back.  Maybe he’s a Firesign Theater fan? (I know only like a couple of folks will get this but its still fun dammit)  Alas it seems Carl’s soul isn’t worth the price needed. The only thing Carl ever received from his father was his butcher knife given to him with his dying breath.

The only company that ever makes it to the Jessup home other than Rae Lynn is his friend Billy Wayne.  This gives Carl a lot of time to himself.  He has no job to speak of so he is consistently enforcing the trespassing ban on his property.  But like all outdoorsmen Carl needs to eat.  The framing story establishes Carl’s story as one from legend and the grain that makes this legend endure is that Carl carries on his Papa’s tradition of butchering long pig.  If you’ve any question as to what that might be you can find the definition right about here.  Do be careful if you go Googling it yourself as you may not like the results you find. 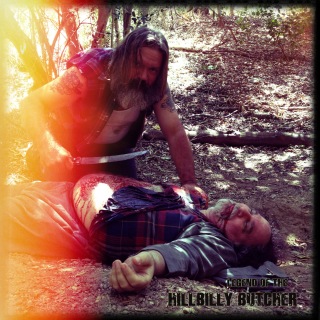 Many transgressors find themselves under Carl’s blade and he prepares the meat for Rae Lynn to cook up for him.  Rae Lynn and Billy Wayne do enjoy the meals though they are not as good as Papa Jessup’s cooking.  Carl has an odd sense of morality when it comes to protecting his property.  If someone is too young they get away with a warning scary though it may be.  If they are old enough to know better and if they happen to be poaching or fornicating they get what Carl thinks they deserve.

As a relationship blooms and quickly withers between Billy Wayne and Rae Lynn, Carl begins seeing visions of a young girl.  These are experienced as waking dreams while old Sam Bakoo haunts his night terrors.  An odd twist for this hillbilly cannibal romp huh?  Nah.  Ultimately this is a story of redemption.  Carl has lived his life the best he has known and he is given a second chance.  The young Jesse invites Carl to redeem his bloodline by “burying the knife.”  Carl is a complex character well played by Paul E. Respass who excels at taking what could have easily been portrayed as a caricature and gives him depth and texture.  Carl wants to do something.  He wants to change if he can; the only question is how.  Does Carl change?  Check out Sledgehammer Films’ THE LEGEND OF THE HILLBILLY BUTCHER and find out.

The technical aspects are largely the work of Joaquin Montalvan and they are quite good.  He shot, directed, edited, cowrote, coproduced and even acted in the film.  I probably left something out there.  Maybe he catered it too.  Busy guy.  He kind of reminded me of Charles B. Pierce in THE TOWN THAT DREADED SUNDOWN by not only directing but also playing a minor but fairly constant part providing much needed levity to heavy subject matter.  Yep.  That’s the director stumbling drunkenly through Carl’s woods.  The set decoration on the film is also top notch.  It looks to be authentic backwoods billy to me.