I remember the first time I saw this trippy flick.  I was staying at a hotel in Pennsylvania in the middle of nowhere.  Next door there was a video store so I wandered in to browse.  They had an arrangement with the hotel that they would rent videos to guests (there was absolutely zero to do around the place) and the hotel conveniently rented out VHS decks.  Lo and behold I found this gem and THE DEAD PIT if I remember correctly.  1989 was a boss year for horror films-PUPPETMASTER, INTRUDER, PET SEMETARY, CLOWNHOUSE, SOCIETY, WARLOCK etc…etc… I could go on forever here.  You know stuff like GRIM PRAIRIE TALES…see.

Only an Italian horror film can cram a bishop, priests, knights, a bridal party,models, a school field trip, punks, an artist, a librarian, a subway train, demons and Captain Panaka in a church. 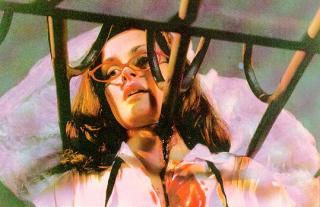 This is the sophmore feature effort by the Maestro’s student, Michele Soavi.  Which is a great entry in an all too brief genre career.

THE CHURCH was supposed to be the third “official” installment of the DEMONS (DEMONI) series though Soavi removed most of the continuity in the script so as to distance his film from DEMONS and DEMONS 2.  This greatly helps the film by removing any need for a ret-con and allows it to build its own story from the foundations up to the spires.  If the score sounds familiar it might be because it has Philip Glass written all over it.  Seems kind of like a coup for an Italian horror flick. 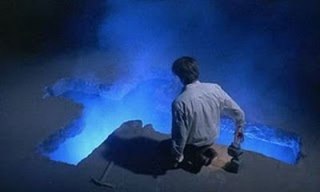 Teutonic Knights are led to a suspected witch and upon finding a devil’s mark upon her proceed to slaughter her entire village.  After putting all of the deaders in big hole in the ground they find one of them is still moving.  Rationally, they decide the dead are possessed and coming back to life, not zombies though.  So the knights seal the pit with a giant cross and build a church over it.

Evan is hired as the librarian to organize the church’s holdings.  Time has not been kind to the gothic cathedral and major renovations are underway both architectural and artistic.  He quickly strikes up a relationship with the restoration artist Lisa.  Though Evan and Lisa are presented as the leads THE CHURCH quickly spins into a frenetic disaster for those who happen to be inside.  Its kind of like the TOWERING INFERNO with tits and demons.  The narrative follows many threads with the main tethers being Father Gus–played by Episode 1’s Captain Panaka–and Lotte who is portrayed by a 14 year old Asia Argento.

Argento must have given the greenlight to Soavi to menace his young daughter and put her into remarkably uncomfortable situations with Tomas Arana and others in order to prepare her for challenges she would face soon after in her father’s films.

Soavi puts together several great set pieces and some long set ups with great payoffs.  Some of the things we get include suicide by jackhammer, barehanded self evisceration, naked goat demon sex and some sensual water drinking from the font by Barbara Cupisti.

The gore effects are great and the ending is suitably nihilistic and ambiguous at the same time.  Though the story can be disjointed and convoluted a bit the main theme remains the same. An ancient evil is reawakening and the church must contain the demonic outbreak to prevent the destruction of the city.  This Italian fever dream is sure to please many fans of Italian horror!

THE CHURCH is available on DVD from Blue Underground and has a biography of Soavi and a trailer.  Picture quality and sound are top notch.