Fans of the first three installments of PARANORMAL ACTIVITY are in for a treat with PA4!  That is if you like the same thing shined up a little with weird spots on it and handed right back to you.  Not gonna lie, I dug the first three PA flicks.  I’ll even go see five too because the bonus scene after the second credits was a hoot.

We all know Katie has been missing since the night of Micah’s brutal slaying.  Well other than for a second or two on security footage at the Rey household on the night of their deaths.  Well she is back in this one.  She moves to a Nevada suburb with a young boy in tow.  After their arrival things turn strange for the family across the street.  Unfortunately the only ones who are clued in or care are the fifteen year olds–probably like the plunging demographic for this franchise.

This series has gone down hill on explaining the reasons for recording 24/7 since the first film.  Especially when at a certain point they don’t bother to review the footage.  I think the main justification for the recording is the computer does it all the time on its own.  After the improbability of lap-tops left open 24/7 and being lugged everywhere the backups are iPhones.  Oddly enough there was no purple flare to be seen. 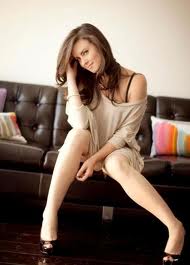 The acting is alright from those fifteen and up, but wow do the two six year old boys try to out Jake Lloyd each other for the duration of the film.  Katie Featherston is back as um…Katie.  Boy howdy has she turned fit, trim and hot too. Demonic possession has done wonders for that girl’s now smoking bod.  On another note, I enjoyed CHERNOBYL DIARIES and I am so glad that Oren Peli has gone on to do other things–than PA flicks I mean.

I’m not gonna spoil anything for you.  It delivers the cheap scares, loud thumps and bangs, falling shit, quick cut reveals and slightly imperceptible motion on ridiculously wide shots.  Do they really scare? I don’t know.  Not me but my wife jumped like shit a few times.  I will say the ending has to be seen to be believed and if you see it make sure to stay for the bonus scene at the very end.

It’s closer to bad than it is to good but I’ll watch the next one if there is one.  This may be the death throes of the PA franchise.  It is by far the weakest entry of the lot.  If you didn’t care for the third one you should avoid this one altogether.