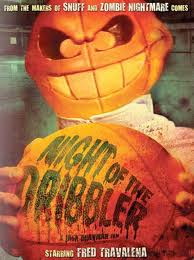 Woah.  This is a bizarre piece of 1980’s/1990’s late night fun.  NIGHT OF THE DRIBBLER is often panned and dismissed out of hand as a forgettable flick.  On the other hand I would lump it into the must be seen to be believed category of flicks.  This film reminds me much more of the slapstick and schlocky high school comedies of the 1980s than anything approaching a slasher.  It turns out it was originally intended to be a slasher parody with all the trimmings but that those trimmings were trimmed at the insistence of the film’s star, Fred Travalena.  This guy brings it all and though it may fall just a tad flat…that is part of what makes this thing  a so bad it’s good gem.  It may be interesting to note that the director also directed ZOMBIE NIGHTMARE and produced SNUFF.

The Watergate Plumbers are a high school, college, high school, college, high school basketball team… They are struggling because the team captain is getting bumped off or maimed or maimed and bumped off yet not dead…and Coach Cherry–TV funny man Fred Travalena!–some of this is hard to follow such as a body being collected that moans in pain…anyhow it works on the overall level at which this thing operates.  If you are going for a slasher or a comedy or a slasher comedy you’ve picked up the wrong DVD.  If you are looking for an inept diamond in the rough of blissfully unaware yet intentional humor then you’ve hit a mother lode!  It’s funny because its not if you know what I mean!

So despite the miscues of the script and the hamstringing any gore or nudity by its star, NIGHT OF THE DRIBBLER still manages to entertain for all of the wrong reasons.  The acting is not bad, it’s atrocious.  Hilariously so.  The new Plumbers captain is High Top who is an “Elvis-like” character as we are repeatedly told during the interview with actor George Thomas in a special feature included on the Code Red release.  This “Elvis-like” character does the leg swing, the sneer, the hand gesturing and even attempts the voice.  All these kids suck at basketball and they suck hard.  It’s unfortunate because 98% of the movie takes place in a gymnasium.  One of the more mind boggling things is that when Dick Airhead, played by Fred Travalena, is announcing the game.  It isn’t the corny jokes or impersonations–they are plain awful and funny in how flat they fall–that is annoying; it annoys the fuck out of me that he looks right into the camera whenever he is onscreen. 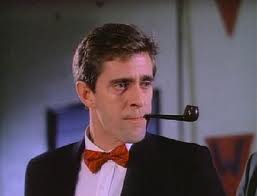 The team captains continue to get killed or maimed.  Not sure if any except the first one actually die because this is a bloodless flick.  The team’s equipment manager, Stan, is next in line to play due to attrition.  The murder/maimings lead to Detective Danny Gibson (portrayed by…erm…Fred Travalena) to investigate the crimes.  Stan’s dad is hopeful at his chances to get to play in the tournament.  Adding to the fun, his dad looks like the Church of Sub-Genius’ Bob Dobbs.  The killer’s mask is actually a hoot as well.

All in all I dug this weird assed movie.  NIGHT OF THE DRIBBLER was released on DVD by Code Red and includes a commentary with um Fred Travalena and the interview with George Thomas that I mentioned earlier.  I actually dig the interviews with these obscure actors and crew members. Fun stuff.

The flick is available on Code Red’s web shop.