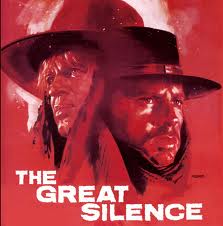 For me, this is the epitome of the genre. Sergio Corbucci’s magnum opus The GREAT SILENCE turns the spaghetti western genre upside down. The hero is a hero, he isn’t an anti-hero. His motives are somewhat suspect however. Silence, though possessing none of the typical anti-hero traits, is a hired gun.  The big bad in this is Loco. He is the leader of a gang of bounty killers and is portrayed pitch perfect by Klaus Kinski. The damsel in distress is black instead of white. Instead of the typical sun washed high sierra most of these films are set in this takes place in snow covered mountains in the throes of a blizzard. This is a nihilistic message movie and it is a masterpiece.

Some dear readers may be aware of my rantings against message movies. In the horror genre I will always crow gorks, gore, fear etc… does not need a message. I still stand by this because fear is the message. It is often jarring and pulls the viewer out of the movie or it goes by unnoticed because it is shoe horned in to begin with (great example, Aja’s The Hills Have Eyes and the U.S. trapped in Iraq/Afghanistan–trying to survive a gork attack is enough for this film message is lost). Oaters are a great vehicle for a message.  They can be shrouded in grey or have the good guy in the white hat defeat the bad guy in the black hat. Because these are mere humans, no matter how skilled or virtuous or vicious, there must be a motive assigned. Wether it be justice, revenge, love or money.  This is fertile ground to plant a message.

I checked this out on Fantoma DVD and it includes the alternate “happy” ending insisted on by many markets. That being said…

It is hard to discuss this movie without revealing some major SPOILERS so consider this to be your SPOILER ALERT!

And Corbucci does so masterfully. It is a conflict between the haves and have nots, or the monied and the poor. There are a group of outlaws (their crime is never revealed though the setting lends itself to either exiled Mormons or just starving and poor who try to find food) living in the mountains and the local general store owner and town boss man, Pollicut, has put a price on all of their heads. He has also put a price on the head of the husband of a young black woman whom he wishes to take as his mistress.  Loco shoots him dead and the young widow, Pauline, hires a mute gunman that goes by Silence. He carries an early automatic in the form of a mauser pistol. His gambit is to bait his mark into pulling first and either shooting his thumbs off and daring him to continue or shooting them dead if he is paid to do so. The main thing here is that Silence stays within the bounds of the law and Loco and his bunch of hired hands always make sure their bounty killings are “all according to the law.”

This film is packed with genre talent. Silence is portrayed by the Frenchman Jean-Louis Trintignant; he agreed

to do the part only if he did not have to learn any lines in Italian. Easily enough done. Instead of the typical reticent lead, Corbucci makes him a mute who had his throat cut at a young age. The German born Klaus Kinski fulfills the role of Loco with his usual vigor and intensity. American and Corman veteran Frank Wolff plays the new sheriff who also brings a bit of levity to this dark film. BLACULA co-star Vonetta McGee rounds out the principles as Pauline who hires Silence to stop Loco and his men.

The stark setting of the snow blasted landscapes lends itself to the feeling of despair the director seeks to build up. This is also the second silence that make up the silence trinity. Is the silence of snowfall the great silence referenced in the title? It is definitely ‘a’ great silence.

Overall this is one of the most nihilistic films I’ve ever seen-and that’s saying a lot (ILSA, LHODES, to name a couple of gems).

Silence is a gunhand of great skill he wipes out rooms full of people as they draw on him. He is built up to be a savior to this group of outcasts and town. That isn’t the case. The message Corbucci reveals is the plight of the poor and their fate at Snow Hill will never be forgotten.  The hint of revolution which underlies this film will creep up more fully in later works. To help illustrate this he is drawn up to be either a Christ-like figure, or perhaps Che Guevara, Silence is a champion of the poor. Like them his hands are destroyed. Christ’s are nailed to a cross and Che’s are severed then sent to Castro after his execution. In a confrontation with Pollicutt, Silence has one hand burned in a stove. This is done as revenge for Silence having shot Pollicutt’s thumb off years before seeking revenge for the murder of his parents. After being beaten and wounded Silence goes to his inevitable showdown with Loco and his men. They are waiting in the saloon with all of the poor outcasts tied up. The end is one of the most jaw dropping scenes that can be found in all of Italy‘s western output-if not in all cinema. It has to be seen to be felt.

Overall the end this is one of the most nihilistic films I’ve ever seen-and that’s saying a lot (ILSA, LHODES, to name a couple of gems).